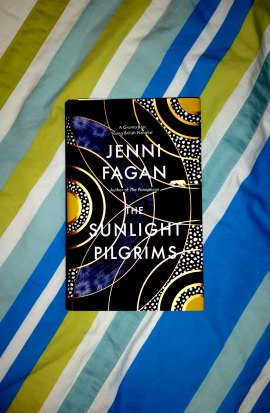 A wonderful story of humanity at its most pragmatic and enigmatic.

Set in 2020, Earth is about to have the worst winter since records began and they fear a new ice age is on the way. After the death of his mother and grandmother, Dylan moves to the foot of the Scottish Highlands, into the caravan that is his only inheritance. In the caravan park, Dylan meets Constance and her teenage daughter, Stella, who was her teenage son less than a year ago.

As the snow gets heavier and the temperature drops, the world is a whole new place – both beautiful and dangerous. In spite of the icy backdrop, an unlikely family unit is created, and their struggle to ward off the cold imparts the story with warmth of another kind.

“To lie like this. Let the snow fall out there. There is an ordinariness to their strange.”

The writing style took me a couple of chapters to get used to, but once I did, I found it to be very effective. The balance of pragmatic and enigmatic was like a kite flying up high but still pinned safely to the ground. The brilliant mix of raw, ethereal imagery and curt, dead-pan humour is simply brilliant. This tantalising combination is embodied in the teenage Stella.

“Our cells crave light because that is what we started as, it’s what we are. All humans are sunlight pilgrims. Except me. Cos I’m a goth. I could totally live without light.”

Stella’s character is sensitively drawn, particularly with reference to her alternative gender identity. It is important to recognise that she does not struggle with her identity, but rather laments that everyone else does, including her father and the boy next door.

“Outside there is a blue, blue sky and frost has dusted the Clachan Fells mountains silver. Stella Fairbairn feels like she is going to cry, and nobody is even up yet. She is a swan wrapped in cellophane and everyone can see through her skin. Lewis will never kiss her again. She might as well forget it. She isn’t pretty, and she’s angular, and she has a penis.”

And then there is Dylan, a man who loves a woman and her child. But struggles with a secret he doesn’t know how to share.

These “normal” concerns, by comparison with the apocalyptic approach of a modern ice age, are what fill the narrative with a palpable sense of humanity. Rather than focusing on the potential drama and jeopardy of the oncoming storm that would turn it into an action film, Fagan uses it as a way to bring out the beauty and fragility of the human experience. The quiet yearnings for a normal life far outshine all other fears. And this is a heartening, noble message. Ultimately, when we are faced with potentially insurmountable odds, all we can do is carry on living. Fall in love, fancy the boy next door, have a gin and grieve our mothers.

“The urge in him to lie with her in the dark and hold her. To drink wine and read books and ignore each other, but her foot just by his, her legs, her mouth.”

2 thoughts on “Review: “The Sunlight Pilgrims” by Jenni Fagan”