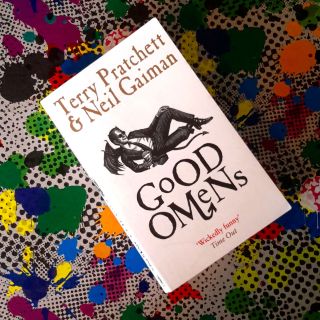 The world is coming to an end. The armies of Heaven and Hell are assembling. The Four Horsemen are gathering. And the Antichrist is playing make-believe with his friends and his hell-hound, Dog. An unlikely group of heroes converge on Lower Tadfield, Oxfordshire. Agnes Nutter’s prochecies are finally coming true, but this “ineffable Plan” business isn’t quite what everyone expects…

Have you ever been enjoying a book so much that you couldn’t put it down, but then found yourself reaching the end too soon and had to slow down so the adventure could continue for just a bit longer? “Good Omens” is the first book that has ever made me do this. Rushing towards its conclusion too quickly, I wanted to stay on the journey. I didn’t want it to end.

The characters, the language, the narrative – flippant and somehow bluntly logical in the face of utter nonsense. It is vivid, colourful and hilarious.

It’s a style I’ve grown to love from reading Pratchett’s Discworld series, but it is my first reading of a Gaiman  story. I couldn’t tell you when it was one or the other that had the reins from chapter to chapter. The narrative voice was consistent throughout and I honestly felt like I was reading a Pratchett. But I will definitely be getting stuck into some Gaiman very soon as a result of reading this book.

This is one of those books you could keep going back to and reading over and over again and finding more and more hidden gems that will keep surprising you for years to come. The imaginative powers of these two brilliant authors are seemingly endless. Endless and bottomless. Keep plumbing the depths of this book and the world they create will only get bigger and brighter. Whether you decide to focus on the story, the clever use of language and syntax or the ideas that bounce around like a rubber ball inside a perpetual motion machine, the delights do not stop coming.

As far as I’m concerned, this is the essence of what fiction should be. A world of play and an open invitation.

In this present moment, I wish I weren’t writing this blog; I wish I were reading “Good Omens” by Terry Pratchett & Neil Gaiman. A book that proves these two men deserve the title of Legend. Modern philosophers and linguistic philanthropists, this book is a gift for me and you and generations to come.

P.s. I finished reading my copy two days ago. I gave that same copy to a friend yesterday. Pass on the joy!