In the lead up to the 2015 UK General Election, I am going to educate myself in the mysterious and confusing ways of politics. I no longer want to be in the condemned section of the pie chart labelled “Non-voters” that seems only to grown. I no longer want to be counted in one of the worst groups of offenders: Young People. My age bracket needs a kick and I’m starting with myself. Read More 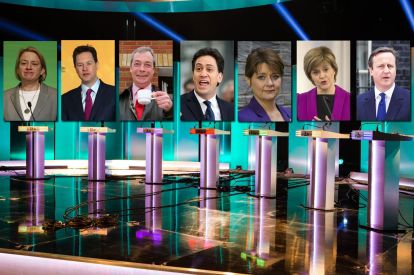 As I’ve already confessed, I have only recently begun to engage in politics and watching this debate is the first time I have been able to take a comprehensive look at each leader and form an opinion. The opening statements were my first opportunity to take stock of each leader. As the ITV producers strove to introduce drama, slowly zooming in on each excessively earnest face, I was forming my first impressions Read More

The Leaders Debate, while interesting, did little to help me reach a decision. As a first-time voter, I am striving to approach the election without bias or preconceptions and consider the policies for their merit, but feel inundated by bias on all sides. Whenever the P word comes up, Passion runs high, often with Prejudice not far behind.

“Politics and Religion are not Dinner Party Conversation.”

– I was told this not two days ago, after proudly sharing with the guests that I had watched the entirety of the Leaders Debate.

If talk of politics either leads to damaging statements born from preconception, or courtesy leads others to abstain from the conversation altogether, how am I supposed to gain an informed understanding of politics? How can young people find a credible, unbiased source of information that will not lead by the collar, but guide by the hand? Read More

TV is attempting to assimilate with the new media, displaying Twitter feeds alongside live coverage. The effect is somewhat confusing, and many viewers agree.

“Dave from Tumbleridge says, ‘Why is the Chancellor sharing half the screen with the thoughts of @iLivThruTwitter and #tags about his unkempt nose hair? It is distracting and inane.’ Thank you for your thoughts Dave…”

I am inclined to agree with Dave. Read More

I disagree with them.

I do not feel powerless. Read More